It was only a matter of time that the Turkeys would find our yard, because they usually hang out right up the street at Flat Rock Brook Nature Center. This past summer and into the fall of 2010, a family unit came to the yard every day. At first mom, dad, and the babies came, then sometimes two moms with the babies, and finally a single mom with the babies, who went from a total of four to three. Once the babies were big, they stopped coming. The first album shows them as almost grown, the second album is when Bob saw them the first time and got photos through the window. 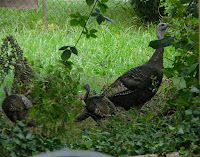 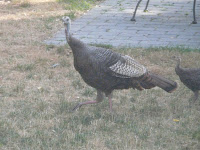 We usually have a pair of orioles each spring, but this was a visitor who arrived on New Year’s Day 2010, much to my surprise! It appeared again three days later, and then once again about two weeks later. I hope it found its way south, because it was a very cold winter. Here are some photos of it on the suet, which it seemed to love. There are two albums. 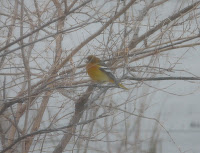 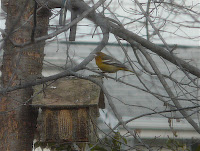 This was another shocker. They also arrived in winter during a massive snowstorm. This album contains photos from two separate sightings. There are also some Monk Parakeet photos in here in between Rusty photos. 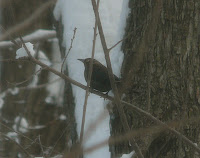 WOW! This new yard bird in the spring of 2009 made me startle the heck out of my husband when I screamed with excitement upon spotting it. What a treat. 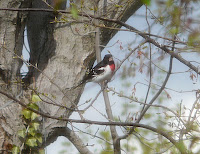 During the winter finch invasion a couple years back, the Pine Siskins were competing with the Goldfinches for thistle during much of the winter. The first album was taken during the Great Backyard Bird Count in February 2009, and the second one was taken in January 2009. 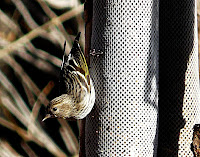 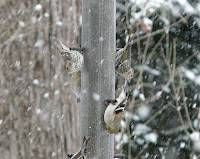 We usually get a random Fox Sparrow or two during any given winter. Here are some photos of Foxy Brown and some friends. 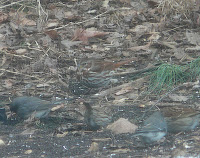 Croton came to the yard for a little while and then stopped. But we do have small flocks of crows fly over the yard occasionally. 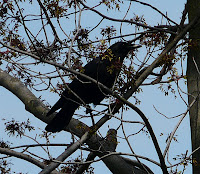 Mary has been around for the past two years or so. The second year, she gave birth to Baby Jesus the Groundhog, who also lived in the way back of the yard and seemed to go off and make his own burrough near here. 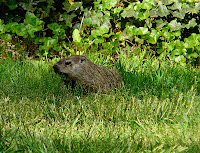 What a cutie. Rocky came by the yard one day while it was still light enough to get a few photos. 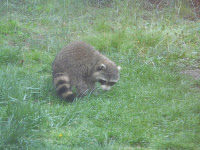