Amazingly, a Prothonotary Warbler was found  at the NY Public Library on 5th Avenue and 40th Street right in the heart of the city. It was so tame, taking food from passersby and hanging out with House Sparrows, White-throated Sparrows, and Pigeons! The bird hung out for about a week and then (hopefully) migrated on strong north winds. Here are a few photos I took with my camera phone, but the photo on the cover was taken by Jared Harary. 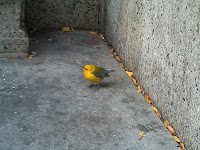 OK, so maybe not as rare here as a Scott’s Oriole (!), but Central Park hosted a stunning Yellow-throated Warbler at the Model Boat Pond and surrounding area near 74th Street and 5th Avenue. I was lucky enough to see this gorgeous bird for at least 45 minutes as it fed on small insects on the retaining wall of the pond. It even exhibited fly-catching behavior every now and then, jumping and fluttering into the air to catch its breakfast. The bird was surprisingly unafraid of the many passing people and dogs.

A Green-tailed Towhee was a regular visitor to a wonderful yard in Collingswood, NJ, during the winter of 2009. I was lucky enough to be able to see the little beauty for a few minutes. After waiting for a couple hours, the bird flew underneath a feeder and showed off for us. I was able to snap a few photos and really enjoy this life bird. A special thank you to Peggy, one of the owners of the house, who very graciously let me and some others sit on the patio and watch the bird. Peggy has a great wildlife-friendly yard, and I also got pictures of many other birds too.

A Pink-footed Goose frequented Flushing Meadows Park and Kissena Park in Queens, NY, for about a week. I saw and lifed this beautiful goose – life bird number 294 – with my friend Jim. It was also a lifer for him. We were so fortunate to have met two people from PA who called as while we were all out looking for the bird. As soon as we arrived though, it flew! We trekked over the highway overpass to another field near the World’s Fair Globe, and luckily the goose was grazing with a couple hundred Canada Geese. We were fortunate to watch the bird for an hour or so. We also lucked out to see a Peregrine Falcon dive-bomb (but not catch) a squirrel right in front of our noses. The bird flew by us so fast and so low that we almost couldn’t believe our eyes. Other nice birds: a couple Brant, a Red-tailed Hawk, a Great Blue Heron flyover (!), some Song Sparrows, a few Red-winged Blackbirds, a Herring Gull, 2 Great Black-backed Gulls, a Blue Jay, and many Mallards, Canada Geese, and Ring-billed Gulls. 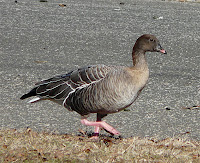 A Western Tanager visited an area near the Winterdale Arch in Central Park starting on March 26th – at least that is when it was first reported. It was hanging out in some Viburnum, where a Yellow-bellied Spasucker had drilled a bunch of holes for sap. The Tanager also enjoyed the Crabapple Tree across the road. 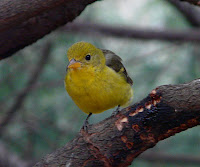 Scotty the SCOTT’S ORIOLE is a first bird for New York State. What an amazing treat to have witnessed this bird firsthand during four visits to Union Square Park, a very small park in New York City between 14th and 16th Streets. Scotty was a wonderful subject to photograph, eating fruit that people threw on the ground for him or following his Yellow-bellied Sapsucker friend around scavenging sap from holes the Sap drilled. He stayed in the park for a few months. 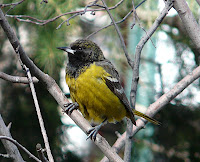