Van’s offspring and other special squirrels

Happy was one of three children of Van and Charly. All three had very red tails. Happy inhabited Van’s squirrel box during the fall and winter of 2006 into the spring of 2007. She became very accustomed to me and would often come up very close to me when I fed everyone each morning. When she reached almost a year old, her tail (like her siblings too) started to change from red to gray from the base up. Unfortunately I never got to see the full tail tranformation. On May 27, 2007, I left my house in my car to go birding. I hadn’t seen Happy that morning. As I made the turn out of my road, there she lay in the road. I raced back home in tears, and Bob came with me as we took her little body and buried her in the backyard. It looked like she had fallen from a wire running over the road, because there was no evidence of her being hit by a car. Bob made a very nice grave site for her in the back, and she is with us in spirit. 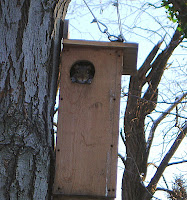 Bubbles the squirrel was one of a litter of three children of Van and Charly. He could be distinguished from all other squirrels by his very dark face. He used to have a very red tail (just as his siblings Bling and Happy had), but when he reached the age of about 1 year old, his tail slowly changed color from the base of the tail up. As it grew out and turned gray, only the very tip was red. Bubbles was a very friendly squirrel. I hope he simply moved on to find another territory. I’ll miss him! (No photo)

Bling was another child of Van and Charly. He also had a beautiful red tail and was a very friendly squirrel, but not as tame as Van and Happy. I’m not sure if Bling decided to go make a home in another area or if he died, but around the same time as Happy’s demise, Bling pretty much disappeared from the yard. (No photo)

Peek-A-Boo nested in Van’s former squirrel box house this past winter of 2007-2008. He moved out as of the summer though, but he could very well still be in the yard. He loved to stick his head out of the entrance hole and just watch all the happenings in the yard. A new squirrel named Boxer moved in after Peek-A-Boo nested here.

Tough Guy was a roughed-up boy who looked like he was in a fight or two. He had half a tail and his face was a bit battered, but he was so friendly. He used to come very close to me and wait while I threw the peanuts on the ground for him and the other squirrels. What a cutie! I miss Tough Guy. 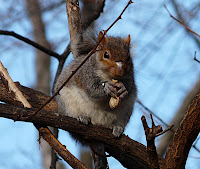 China had been in the yard for two years or so. The only reason I knew her from all other squirrels was by her raccoon-like tail coloring. She had a ringed pattern on her tail that distinguished her from others. Unfortunately, the tail was somehow injured, and it simply hung on the ground from the middle of the tail to the end. But she seemed to do well even with the injury. We haven’t seen China since about the summer of 2008, but we hope she is running around out there somewhere. 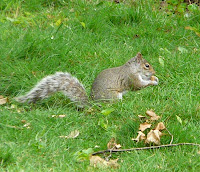 Jesse was the first squirrel I really took any notice of in the yard, because he had NO TAIL. None. Nothing. Zip. I’ve read that the squirrel’s tail performs many functions, including balance and cover in inclement weather. Jesse seemed absolutely unaffected by his shortcoming. He could jump long distances from one tree to the next with complete confidence. He was a little racer, and you could easily spot him as he zoomed around. After almost a year and a half of observing him, I noticed his leg had become seriously injured. He had a bad limp, and I feared it would mean the end. Any sign of weakness and he would be food for larger prey. I didn’t see him for about three weeks after that, and I knew the worst had happened…but to my surprise he appeared looking almost better. It was a nice, sunny day, and Jesse hopped around the yard looking for food. As dusk approached, I saw him hop off farther and farther away, and somehow I knew that would be the last time I saw him. And it was. I think Jesse came back just to show me he was OK, and maybe he wanted to say goodbye. I always still think about him. (No photo)

Vertigo was a squirrel who fed in the yard for almost a year and was afflicted with some strange muscle or nervous system problem that made him lean to one side and fall over a lot. When he hunted around the ground for nuts I threw out for the squirrels, he tilted his head to one side and used one nostril. Once he got a peanut, he would stand on his hind legs, start eating, and then fall to the side and have to continue to try to stabilize himself until he finished. He was obviously able to sustain himself, but one day he just stopped showing up, and I don’t know what happened to him. (No photo)