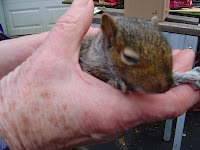 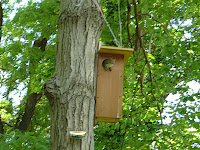 This is the story of Van. One day my husband Bob was driving down a road near our house, when he saw something in the road that at first glance looked like a stick. But then it moved, and he swerved to avoid it. When he stopped, he saw a woman in the road trying to rescue some tiny squirrels that appeared to have fallen from their nest. There was no sign of an adult squirrel.

One of the babies was already dead. The other two didn’t look good, but Bob put both in a box and drove immediately up to Flat Rock Brook Nature Center. The wildlife person there took one baby who seemed like he would not make it. Sadly, he was already cold and almost dead, but they would try to help him. The person recommended a wildlife rehabilitator, who lived about 25 minutes away, for the other squirrel. Bob named this other little fellow Van.

As Bob rushed Van over to the rehab place, he put a few lettuce leaves into the box for Van that he had grabbed from home. Van began to nibble on the leaves and looked up at Bob as if to say “thank you for saving me.” Bob said he will never forget that look of gratitude. They arrived at Carol the rehabilitator’s house, and she immediately gave Van a hot bath to warm him up. She told Bob that if Van made it through the next few days, she would need about 2 months to rehab him. Once that happened, we would take him back, and he would live in our yard.

We called Carol in a few days and learned that Van had pulled through. Now he needed some careful attention and nurturing. He was so tiny, as you can see from the photos in the album. Bob needed to build a squirrel box that would become Van’s home in our yard. The box had specific dimensions, and Bob set to building it. About one week before Van was to come home, we took the box over to Carol’s house so Van could get used to his new home and build a nest in there with leaves, etc, that Carol provided. We got to see our little baby too!

One week later, we picked Van up from Carol’s house and brought him home. It was a hot day, and it took Bob a while to set up the wires and properly secure the box to a tree about 15 feet above the ground. Van was restless, because the box’s entry/exit hole had to be sealed up until we could properly release him. I was talking to Van the whole time in a very soothing voice to keep him calm and reassured. Finally the wires were in place and the box was ready to be secured. Again, I kept talking to him the whole time. At last, the box was up, and the moment had arrived.

We took the piece of tape off the hole, sat down on the patio chairs with a camera in hand, and waited. Look at the photos. You can see one tiny paw appearing over the hole. That was the first photo of Van in his new home. Then Van peeked his head out. And then he got the nerve to crawl out of his box and be in the wild for the very first time in 2 months. Also, this was the first time he ever climbed a tree in his life. He tentatively crawled up the tree trunk and onto a horizontal limb. He kept looking back to his box and then to us and back to his box, as if to say, “Can I REALLY come and go as I please?” Then he started racing up and down the limb and climbing higher and higher. Check out the photos…they show the whole process.

I was nervous that he would not come back or that he would hurt himself. He was very unsteady and needed to learn how to jump and run and not stumble or fall. As dusk approached, we saw Van go back into the box, and we said goodnight to him. I was terribly worried about him and wondered if he was anxious or lonely. The next morning I ran outside and waited. And there he was peeking out of the box! We had nailed a container of food under his box, so he had a supply of nuts, which we gradually decreased as he learned to find food by himself. We provided a water bowl on the patio too. Almost every day we saw Van in the box for many months. He was so accustomed to me and my voice that he would run over to me every morning and sit right beside me as he ate.

After a while he vacated the box and apparently built another nest in or near the yard. But he still ran up to me almost every day. A very clear marking on Van was a dark line down the center of his nose (see photos). His face was very dark too, more brown than gray. So I always knew it was him. Soon though he visited less frequently, or maybe he was there all along but I didn’t see him every time. I am not 100 percent sure what happened to Van. No matter what, his legacy lives on. During the time he was with us every day, Bob and I witnessed him on the patio with a female squirrel with a red tail who we named Charly. That was the one and only time we ever saw squirrels going at it!

About 9 weeks later, 3 little squirrels all with red tails appeared in the yard. We named them Happy, Bling, and Bubbles. Bubbles is still with us! One of those offspring also had 2 babies, Peter and Piper, also with red tails! One of the others had a single baby named Pickles, who had a red tail too. So all of these guys and girls come from Van and Charly. No matter what, Van is with us always!